Results: The results showed that addition of 0.5% by weight of the silica gel powder for PMMA recorded the highest mean value (2.69 ± 0.08 MPa•m1/2) and this was statistically significant.

Conclusion: Within the limitation of this study it was concluded the addition of 0.5% by weight silica powder gel could increase the fracture toughness of PMMA.

Provisional restorations are used routinely in the dental office to restore prepared teeth until the final restoration are ready. These restorations must be biologically compatible to restore function, esthetics, and have high mechanical properties to withstand various forces in the oral cavity.[1-4] Many available materials can be used by clinicians for this purpose. In 1937, heat cured resin was introduced to fabricate such restorations.[5] Since 1937, there have been significant modifications and improvements.[6] Bis-acryl was introduced in the 1980s, and further developments are being introduced every day.[7] These restorations should have adequate strength, color stability, are easily fabricated, and have no damaging effect on the pulp and surrounding tissue. Polymethylmethacrylate (PMMA) and bis-acryl are the most commonly used materials for that purpose.[6-8]

Silica gel is a form of silicon dioxide made synthetically from sodium silicate. It has a thin, porous, and granular structure. Silica gel is a tough and hard material with an average pore size of 2.4 nanometers. The crushing of silica gel produces a powder used as a catalyst in different chemical processes.[21]

The structure of silica gel [Figure 1] is characterized by the presence of individual functional moieties, such as siloxane (≡Si–O–Si≡) with the oxygen located on the surface as well as silanol groups (≡Si–OH).[22-24]

To a limited extent, silica gel is used as a reinforcing filler in silicone rubber; however, there is very little information available on the reinforcement properties of silica gels.[25] Balos et al.[26] in 2014 conducted a study reinforcing PMMA by adding small concentrations of nano silica (0.023%, 0.046%, 0.091%, 0.23%, 0.46%, and 0.91%) with the PMMA to improve the mechanical properties. The results of the fracture toughness and micro hardness tests showed that the 0.023% concentration (the lowest concentration) of the nano silica exhibited the highest mechanical properties. The higher concentrations of nano silica demonstrated that the fracture toughness gradually diminished.

The purpose of this study was to evaluate a novel approach for reinforcing two types of provisional restoration materials (PMMA and bis-acryl resin) by adding different concentrations of silica gel powder (0%, 0.5%, 1%, 1.5%, 3%, 5%, and 10% by weight) to the polymer. The hypothesis of this study is that the addition of a silica gel powder at different concentrations will increase the fracture toughness of the provisional restoration material.

This study evaluated the fracture toughness of 2 types of provisional restoration materials (PMMA and bis-acryl resin) after the addition of different concentrations of silica gel powder (0.5%, 1.5%, 3%, 5%, and 10% by weight).

A total of 60 rectangular fracture toughness specimens were prepared in this study. These specimens were divided into 2 groups according to the material used (PMMA or bis-acryl). Each subgroup was divided into 6 subgroups according to the silica gel concentration (0%, 0.5%, 1.5%, 3%, 5%, and 10% by weight). The 0% silica gel concentration was used as the control group.

The dimension of each specimen was 2 mm × 5 mm × 25 mm according to the ISO 13586 Standard.[27] Specimens were fabricated using a stainless steel split-mold which was specifically constructed for this study. PMMA specimens fabrication was as follows: 0.5 g of powder polymer was added to 0.25 mL of the liquid monomer and mixed with a clean stainless steel spatula; when the mixture reached the dough stage, it was packed slowly into the split-mold to avoid trapping of air; a glass slab was then seated over the mold to pack the mix and to help remove the excess material; the specimens were allowed to polymerize for 15 min at room temperature. After the specimen was removed, a razor was used to remove all of the flash material.

A pre-crack was placed in each test specimen by placing a sharp scalpel at the middle of each specimen and applying hand pressure using a measuring microscope (Nikon Measure scope MM-11, Nikon Corp).[15] The crack length value was recorded.

The specimens were loaded in a LIoyd Universal Testing Machine until fracture to determine the fracture toughness of the material. Each specimen was positioned on the bending fixture, consisting of 2 parallel 2-mm-diameter supports, 20 mm apart. The load was applied at a crosshead speed of 1 mm/min, with a third 2 mm rod placed centrally between the supports [Figure 2]. The peak “force to fracture” in Newtons was derived from the stress-strain curve and recorded. This force was used to calculate the fracture toughness (K1c) in MPa•m1/2. 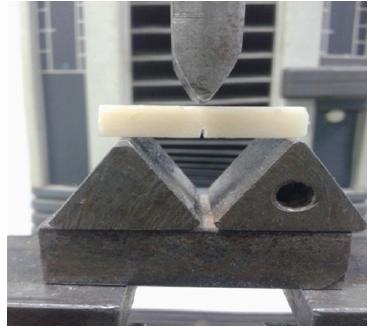 The following equation was used to determine K1c:[28]

The fracture toughness data of each type of provisional material was tabulated and analyzed with a 2-way analysis of variance, followed by the Tukey standardized range test (α = 0.05) to determine statistical significance.

PMMA: polymethylmethacrylate; Tukey’s rank as function of modification concentration on both groups

The hypothesis of this study was selectively accepted dependent on the concentration of silica gel studied. The only concentration that showed a statistically significant increase in the fracture toughness was 0.5% silica gel in PMMA. The remainder of the concentrations tested did not show statistical significance. Although studies have shown that the addition of woven fibers and unidirectional fibers increases the surface toughness of provisional restorations, there is a need to add another form of an easily handled reinforcement material.[3,4,15] Our novel approach was to add silica gel powder to the provisional restoration material. The inherent flaws that occur during fabrication of polymer specimens may have a direct effect on the fracture toughness values obtained during a three-point loading test. Fracture toughness describes the mechanical performance of dental polymers under a load. Fracture toughness provides information on the crack propagation of the material and is described by the critical stress intensity factor (KIC). KIC is an indication of the onset of material failure.[3,15]

All of the specimens were constructed with the same dimensions and under the same conditions. This ensures the same dimensional changes during processing, as well as the same force distribution. Specimens were stored in distilled water at 37 °C for 24 h. It is known that the provisional materials used in this study imbibes the majority of the water during the first 24 h of immersion. The test was performed with a cross-head speed of 1 mm/min. This speed is considered to be within the range used in determining the fracture toughness of dental biomaterials (0.1-6 mm/min).[27]

The results of this study were not uniform; therefore, a correlation between the addition of the silica gel with any concentration and the fracture toughness values could not be established. However by adding 0.5% silica gel to the tested resins demonstrated a statistically significant increase in the fracture toughness values. This would indicate the need for further investigation on the effects of lower concentrations of silica gel. This was not investigated in our study.

The basic purpose of a filler (silica gel) is to reinforce the polymer (PMMA and bis-acryl resin). To obtain this, the mix should be homogenous with good filler/polymer adhesion where the filler starts to improve the mechanical properties of the polymer.[29] Silica gel contains siloxane groups at the surface that are changed into hydroxyl groups. The hydroxyl groups polarize and form hydrogen bonds due to their proximity to each other.[30,31]

Because of the non-crystalline structure of the PMMA, PMMA has a high internal energy. Therefore, molecular diffusion can occur in the PMMA resin due to a lower activation energy. The imbibition process of acrylic resins is partly due to the formation of hydrogen bridges between the polar carboxyl group and water.[32] It has been shown that PMMA adsorbs to the surface of the silica by the formation of hydrogen bonds between the carboxyl group of the PMMA and a silanol group of the silica.[33] Wei et al.[34] illustrated that materials produced from MMA with silica and PMMA with silica[35] where the hybrid homogenous materials formed without covalent bonds but with hydrogen bonds as the main interaction between the organic-inorganic phase.

Fracture toughness values obtained in the laboratory under static loads may not simulate the in vivo oral conditions. The forces in the oral cavity are cyclic, not static, and there are other factors which may affect the overall performance of a provisional restoration, such as temperature and pH. However, the testing of different materials in a laboratory controlled situation may be a useful predictor of clinical performance.

In this study, temporary luting cement was excluded. Luting cement may increase the fracture strength. This subject should be investigated in future studies. The most important suggestion for future studies is to perform research using lower concentrations of silica gel. Other mechanical properties may also be tested. Factors like wear resistance, surface roughness, and polishability may influence color stability. These characteristics should be considered for future research.

In conclusion, within the limitations of this study, it was concluded that the addition of a 0.5% concentration of silica powder gel by weight would increase the fracture toughness of PMMA.

We thank a lot Dr. Jon Wagner for his contribution in language editing.

There are no conflicts of interests.